Thank you for reading about my vision for Tuxedo. 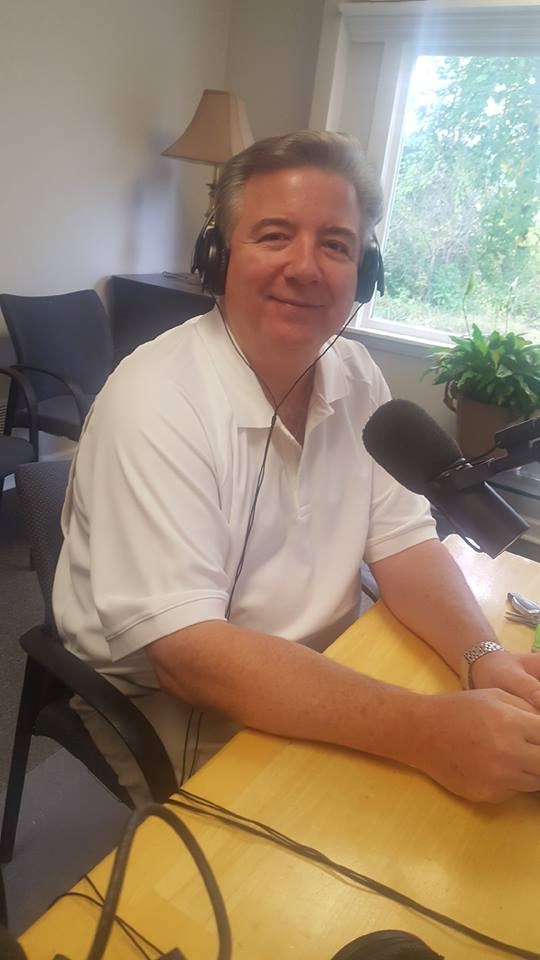 I remember my first encounter with Tuxedo. I was a teenager with a new license growing up in Stony Point. My friends and I would often drive “up the lakes” into Harriman Park. Occasionally we would pop out in Tuxedo. Every once in a while, we would do it on purpose and grab a burger at the Red Apple Rest.

Later a very good friend of mine took the job as Chef at the club. I actually worked there a couple of times when he had a very busy weekend and was short staffed. Not sure if I ever got paid for that! It was then that I really got an introduction to the beauty and history of the Town and Village.  I had bought a condo in North Rockland and was lucky enough to marry a woman who would put up with me. As we decided to start a family, we realized that we needed more room and the hunt for a home began. I was looking in the NY Times real estate section when I saw a house for sale in the park in our price range. If I remember it was small and tall with a spiral staircase running right up the middle. Terry the real estate agent then told us she had the perfect house to raise a family in just outside the gates in a neighborhood called Maple Brook in Eagle Valley. We fell in love with the house, the neighborhood and the Town. We’ve been here since 1995.

My wife and I have watched some things change in town since then. Other things haven’t changed at all. We loved that people left each other alone but were always available to help each other when needed. We’re especially grateful to have been supported and to be able to provide support to our neighbors.

I became involved where I could. Little League, Scouts, PTO/PTA Chamber of Commerce, Sons of Italy, Ramapo Valley Rotary to name a few. Both Marie and I enjoy our community and working with the people who live here.

One day Andy Rogers knocked on my door. “Would I sign his petition?” Sure. “Would I like to get involved in the town?” Ok. Within a few months I was on the Zoning Board. Marie of course was dead set against me getting involved in politics. Smart woman. She eventually came around because she thought I could help improve the town and its Recreational facilities. I still have ideas about how to do that.

When we moved in the school was thriving but there were issues with our relationship with Greenwood lake. Our third child will graduate this spring from GFB with an amazing education and is college ready, just like his older siblings did.  With Greenwood Lake gone everyone knows we have enrollment challenges.  Tuxedo Farms can help. If they build what they said they would build, we’ll get the influx of kids we need to make the school even better. We’ll get the people we need to help turn downtown around. We’ll get the tax revenue we need to provide the services our residents deserve.  We have to be a calm, reasonable partner with them to get this moving, I’ve watched the real estate boom going on all around us. I’m sure that Related would like to be taking advantage of this market too. I believe I can foster a relationship between them and the Town that will benefit us both. 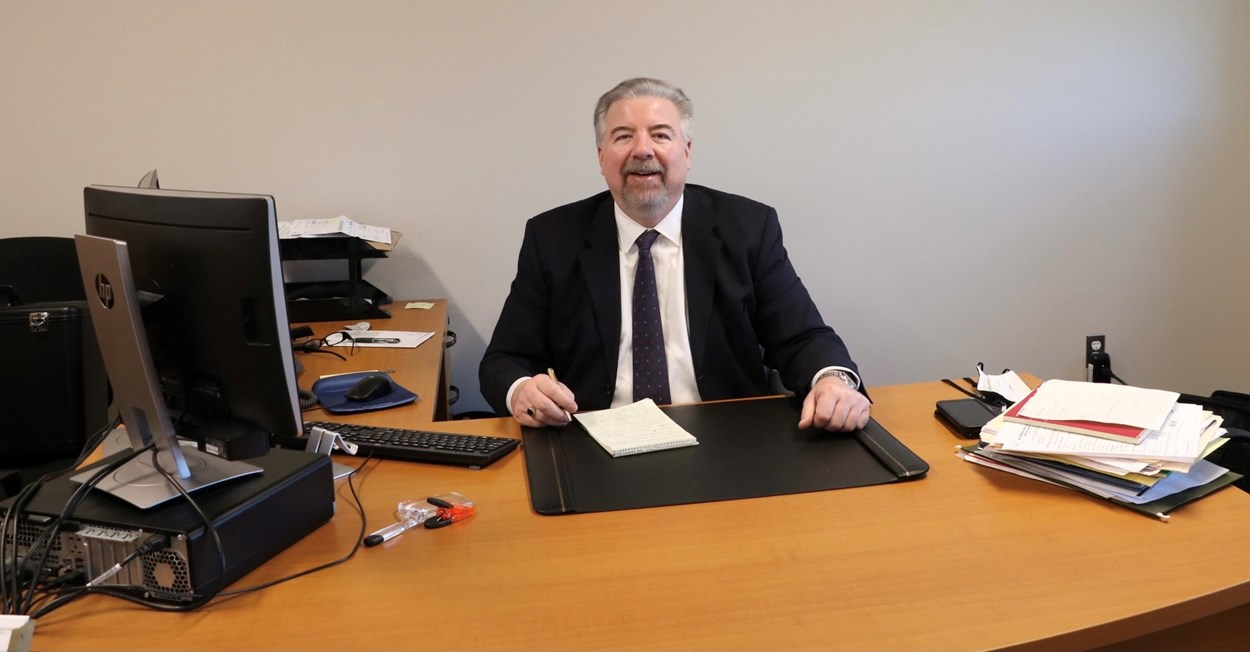 When I was sitting on the Town Board and became involved with county politics, I realized how rarely Tuxedo was mentioned. We are on the smaller side when it comes to towns and the furthest south.  I ran for and was elected to the County Legislature. I immediately began a push to replace the bridge into the East Village. The bridge was recently completed. Hopefully we will never again need to request have an ambulance or Fire Equipment parked in the East Village because the bridge is out and our residents are unprotected and cut off.

Later I became involved with a group called United Monroe. The village of Kyrias Joel was trying to annex 500 acres into the village and add tens of thousands of residents. I was concerned that it could damage the Ramapo river and allow village of Kyrias Joel to completely control the huge town of Monroe. Tuxedo’s shared border with Monroe was a big concern even though many Tuxedo residents didn’t understand that immediately. The residents from the north end of town who send their children to Monroe Woodbury were directly affected. Their school taxes and property values were most immediately at risk. Many of them and some residents from the rest of town joined the work with United Monroe and forced the village of Kyrias Joel to form a new town not adjacent to Tuxedo and outside of the Monroe Woodbury School District. The North End residents sleep better because of that w 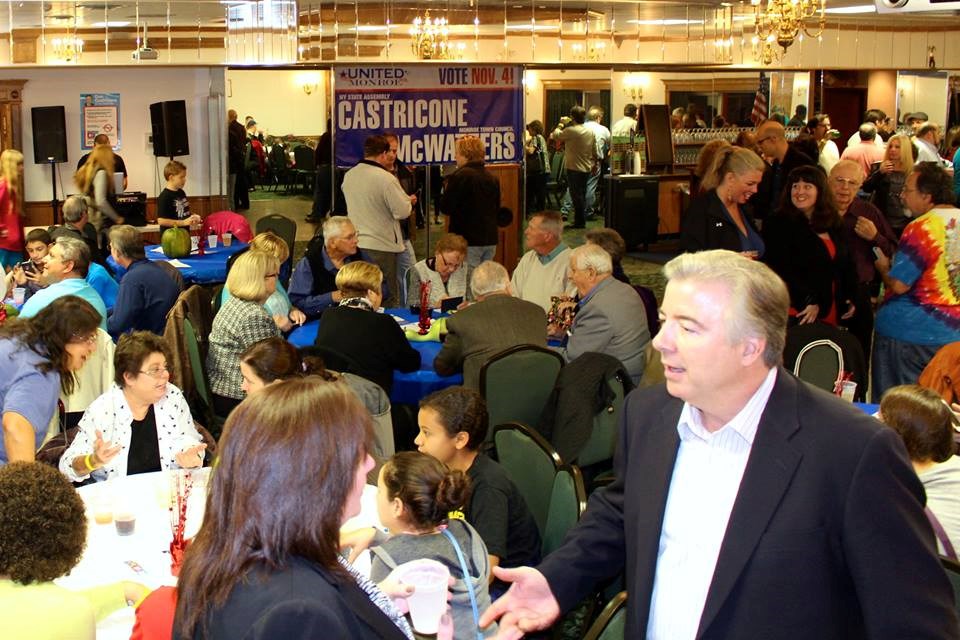 The Ramapo river is still threatened. The river’s fish population has decreased by half just since we moved here.  One big reason for that is a chicken processing plant dumping salt waste into the river. We need a voice that understands this issue well enough to defend our interests. I do and will defend our interests on all levels, including applying political, legal, social and moral pressure.  I have been lucky enough to have made lifetime friends and allies in the struggle with United Monroe. They stand by willing to help.

Now I sit in the county building every day reading and approving the contracts the county enters into. I see the community block grants, the police and emergency services contracts. I see the children’s services and senior services that receive funding from the State and County. I rarely see Tuxedo on any of them. It isn’t the County’s fault. They help wherever they can whenever they are asked. The trouble is that Tuxedo doesn’t have the people at the helm that know what to ask for, what to apply for and how to get the funding. I do.

There is a way to move through Civil Service issues with town employees. Deciding that there is no correct job description for our recreation director and terminating her isn’t the way. I was selected as the Chairman of the Personnel and Compensation committee when I was in the legislature. I negotiated CSEA and COBA contracts while there. I ordered desk audits and navigated the Civil Service system to the benefit of our employees and the county. I would like to do that for the town without costing valuable public servants their jobs.

I am very concerned about the town budget. We all made sacrifices so that a huge deficit could be turned into a balanced budget and a comfortable surplus. In one year, that surplus is gone. The police budget was actually cut and the salary for the deputy town supervisor was raised dramatically.  I don’t understand how anyone could vote for that in good conscious.  The current course will inevitably turn into tax increases or layoffs or both. I firmly believe that we can treat our town employees with the respect they deserve and avoid huge tax increases and layoffs if we get a handle on the budget now, before it’s too late. How can I be sure of that? Well, I’ve done it before. As a member of the Ways and Means committee in the legislature every budget I oversaw was smaller than the year before. We never cut services and never laid anyone off. I’ve been on the School Board for almost two years now. Last year’s budget had a ZERO% tax increase. This year’s will be the same. ZERO. Next year’s will be the same. ZERO. We have uncovered the funds we need to upgrade the facilities and fix the school. We’ve gotten rid of problem administration at the school and are in the process of restructuring the school leadership rubric so that we never run into these problems again.

This is who I am, and why I want to be your Town Supervisor. I understand municipal governance and the rules. I don’t need to hire a consultant every time someone asks a question. I’ve invested my entire adult life in our town, raised my family here and want my kids to raise their’ s here. I have the passion and the vison to understand what needs to be protected and retained in keeping with our outstanding heritage and character, and what needs to be changed, nurtured and grown. I have no hidden agendas. The only thing I have to gain is to leave this town better off than when I found it.

I am asking for your support.

Dan with County Executive Steve Neuhaus welcoming Yankee Great Micky Rivers to the Gershwin for Heroes fundraising concert. Dan and Steve served on the Board of Directors of that event raising over $20,000 for Wounded Warriors and the Families of Iraq and Afghanistan War Vets. 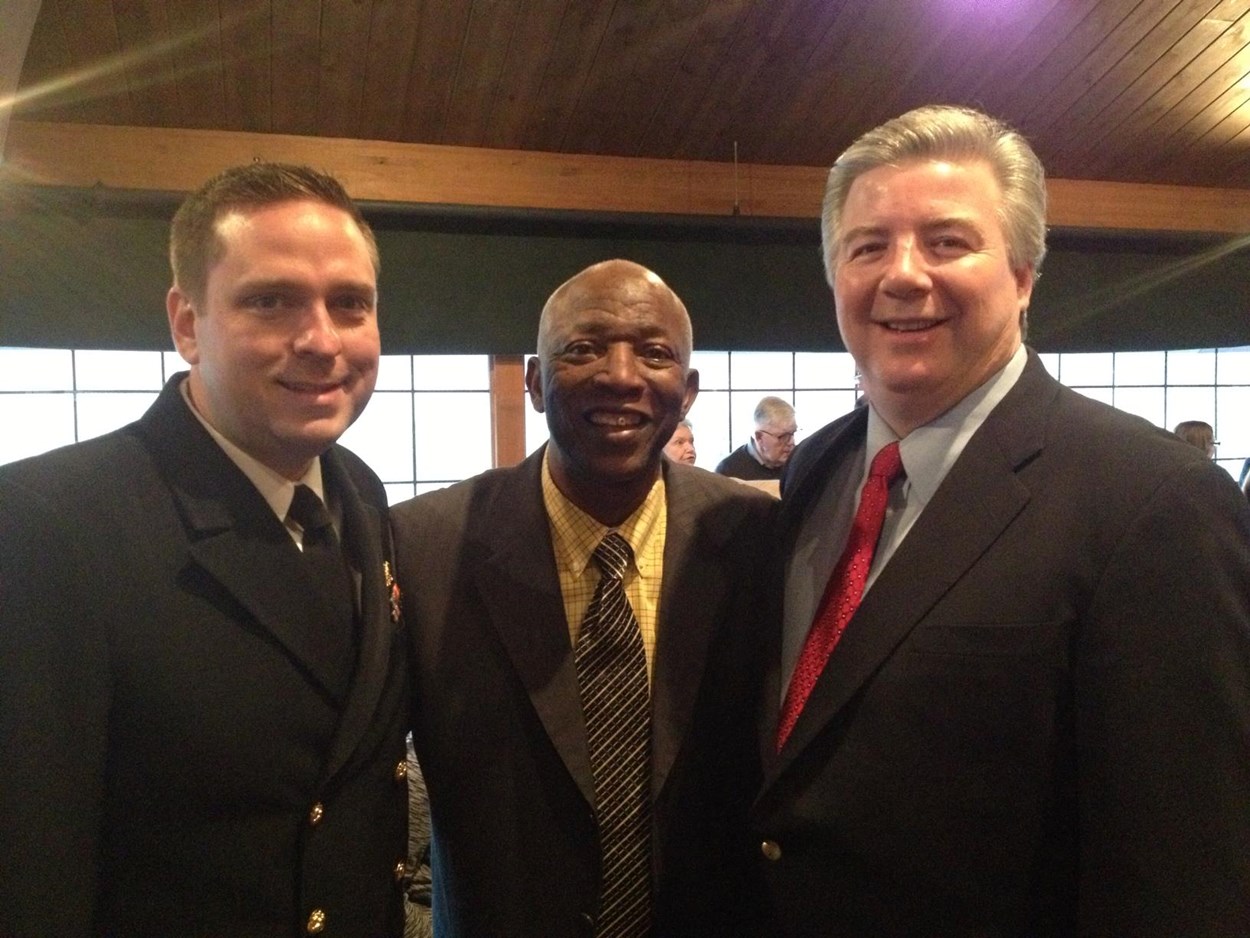 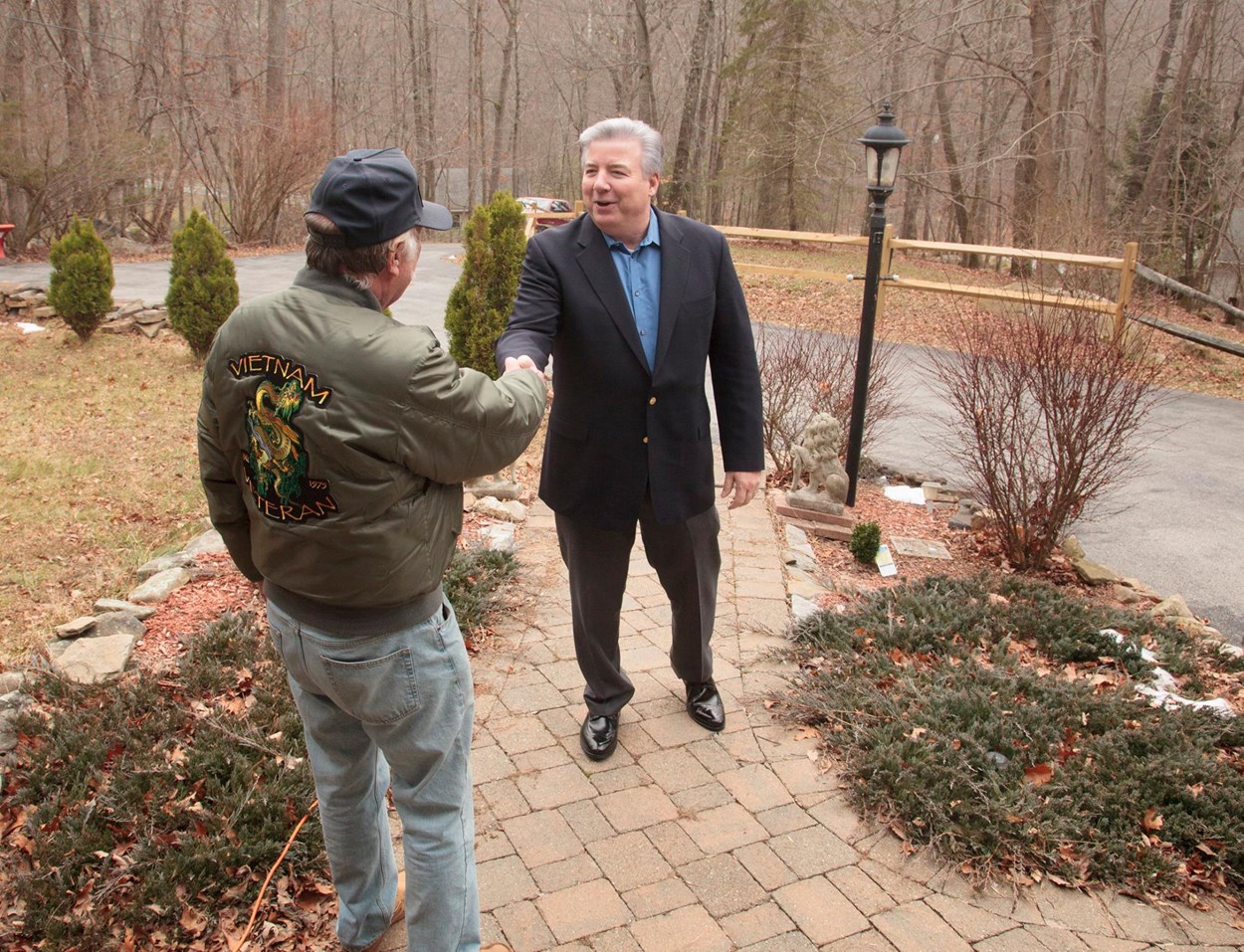 Dan stopping by local Veteran Bill Lemanski's home.  Dan was one of the founding board member of the Tuxedo Little League and managed teams for 8 years. Dan served as the Town's Eagle Scout coordinator for our local scout troop. 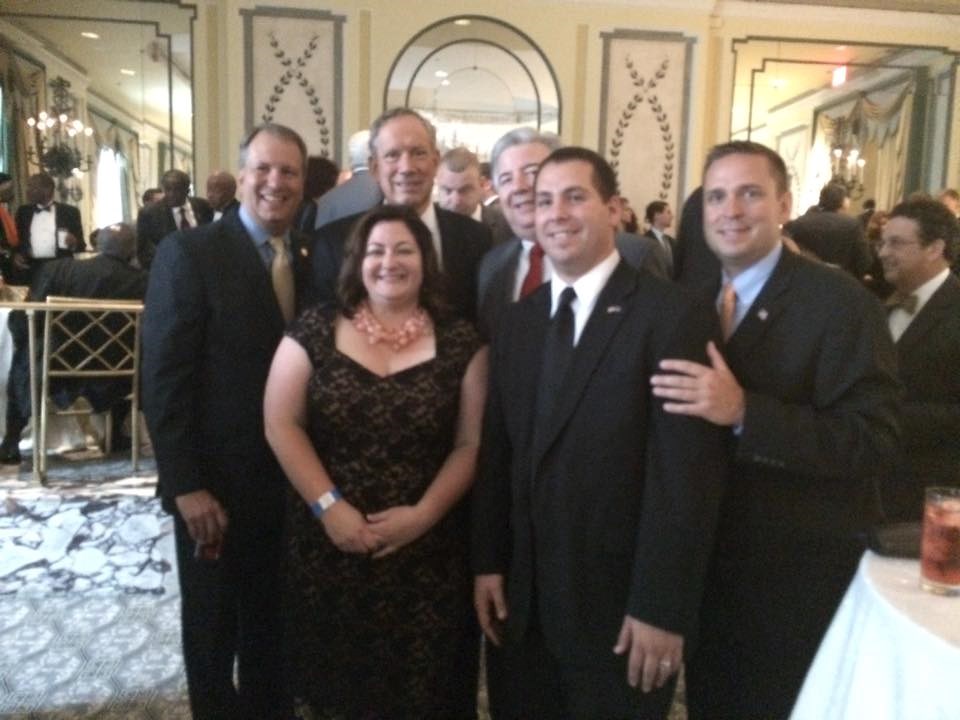 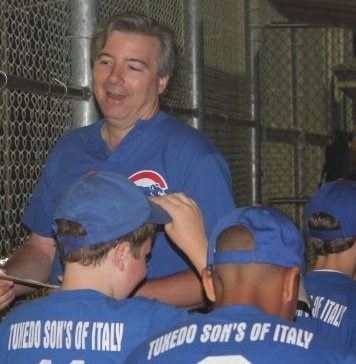 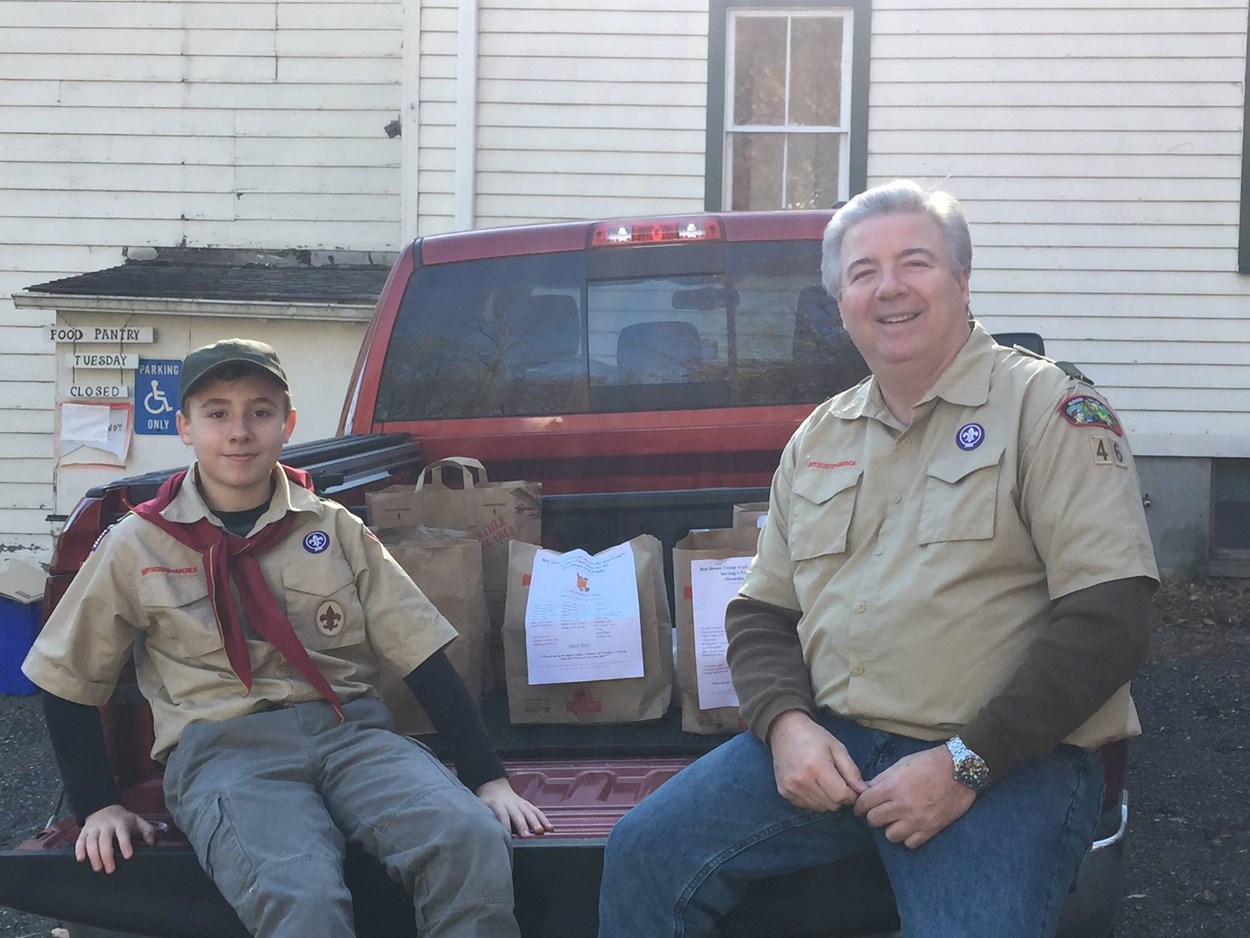